In a new comparative fMRI study just published in Cerebral Cortex, we and our collaborators in the Vanduffel lab (KU Leuven) provide novel insights into speech evolution. These data by Erb et al. reveal homologies and differences in natural sound-encoding in human and non-human primate cortex.

From the Abstract: “Understanding homologies and differences in auditory cortical processing in human and nonhuman primates is an essential step in elucidating the neurobiology of speech and language. Using fMRI responses to natural sounds, we investigated the representation of multiple acoustic features in auditory cortex of awake macaques and humans. Comparative analyses revealed homologous large-scale topographies not only for frequency but also for temporal and spectral modulations. Conversely, we observed a striking interspecies difference in cortical sensitivity to temporal modulations: While decoding from macaque auditory cortex was most accurate at fast rates (> 30 Hz), humans had highest sensitivity to ~3 Hz, a relevant rate for speech analysis. These findings suggest that characteristic tuning of human auditory cortex to slow temporal modulations is unique and may have emerged as a critical step in the evolution of speech and language.”

The paper is available here: 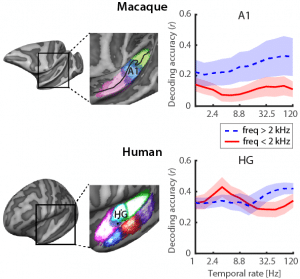